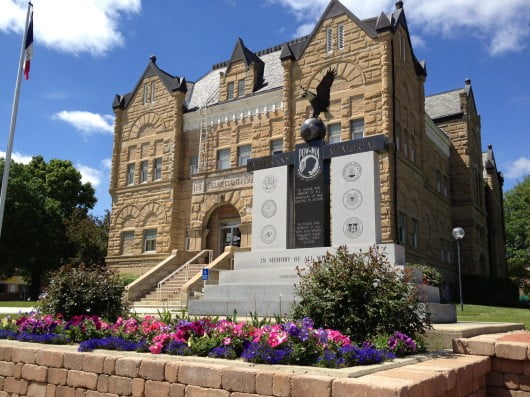 Despite the chilly, cloudy weather, about 50 riders gathered along Casino Row in Council Bluffs this morning for the first day of the RAGBRAI XLI Route Inspection Pre-Ride. After we assembled, we headed out of town with a police escort through the Historic 100 Block.  The 20 week-long pre-riders were joined by another 30 riders from Council Bluffs and Harlan.

Just wanted everyone to know that Council Bluffs will have dip site festivities to dip tires in the Missouri River at the new Tom Hanafan River’s Edge Park with daytime entertainment and a beverage garden on Saturday.

A HUGE thanks to Tricia and Barry from the Council Bluffs RAGBRAI Committee for supporting the riders from Council Bluffs all the way to Harlan!  You folks are the best.

Today’s ride was approximately 57 miles, with 2,476 feet of climb. The ride traveled through mostly rolling hills, and ended along the Western Skies Scenic Byway.

Here are some facts and points of interest from the towns we passed through today:

HISTORIC 100 BLOCK of COUNCIL BLUFFS
The 100 Block of Broadway downtown Council Bluffs is home to Dixie Quicks, Rodeo BBQ, Fiddlin Monkey, the Broadway Bar, the 1892 German Bier Haus, T’z Sports Bar, Barley’s, and Glory Days.  The Farewell Breakfast will encourage the riders to pause and fuel up on this block Sunday morning, July 21.  The block will emphasize it’s Victorian character and will transform the block into “Petticoat Lane” for the first breakfast stop, complete with costumed characters to tease and delight the riders, wishing them well for the week ahead.

WESTON
Weston is a village about 13 miles out of Council Bluffs. They will not be hosting organized RAGBRAI activities, but welcome you to their town if you would like to visit.

UNDERWOOD
If you decide not to eat in the Historic 100 Block, Underwood is your place for breakfast. The rapidly growing town of 917 will be going all out to welcome RAGBRAI to their home. Volunteer firefighters will be flipping pancakes, and the Optimist Club of Underwood, Underwood Bar and Grill, 4-H Club and the Underwood Athletic Booster Club will be serving a variety of breakfast foods including homemade cinnamon rolls, fruit smoothies, pancakes, breakfast burritos, chicken wraps, various drinks and more!

As you bike through Underwood, keep your eyes peeled. Their theme is “Riding to Sasquatch”, and you may just catch a glimpse of the mythical beast. He will be visiting thanks to a partnership with Jack Links Beef Jerky (yes, there will be free samples!). Other attractions will include Jam Time DJ, the U.M.B.A community center, Trail Head Park, and the veterans’ monument located in front of the community center. For more information on Underwood and the RAGBRAI experience, visit their site at http://www.underwoodia.com/.

NEOLA
Just 5.4 miles down the road lies the town of Neola, and your first glimpse of the town will likely be the steeple of St. Patrick’s Church, which can be seen for miles. The town of 845 is nestled on the side of a hill, and hopes to give riders a glimpse of their Native American heritage. In fact, the name “Neola” comes from the Ioway word meaning “lookout.” Cyclists should look out for the town’s bronze eagle monument, erected in 2007, in honor of military men and women. The town overlooks the Mosquito and Neola creek, and offers a variety of recreational activities for those with extra energy. Quail Run Golf Course is a nine-hole golf course, and the Arrowhead Park is just on the edge of town and hosts camping, fishing and hiking trails. For more information regarding the town of Neola, visit their site at http://www.cityofneolaiowa.com/.

MINDEN
The city of Minden is located in the northern tier of Pottawattamie County and is home to 597 people and is our meeting town for the day.  Minden will have lots of vendors on the triangle in town or you can pop into the Minden Bowl.  The bowling alley is known for some of the best food around!  Minden is also home to Kelly’s Berry Best Pies, who has been a faithful RAGBRAI vendor for many years.

SHELBY
The welcoming town of Shelby is located in the heart of Southwest Iowa’s rolling hills, woodland and farmland and will be our last official stop before Harlan. The official town motto is “We acknowledge realty and encourage dreams.” The town IS a dream, and we will ride into it under a giant bicycle arch. The Agricultural Symbol is probably the town’s largest attraction, as it is an ear of corn standing 76′ tall. Another can’t-miss is the antique Coca-Cola mural just past Shelby’s Hardware Store. You might also want to swing by the Rock Island Stone Arch, which is listed as one of the only four 30’ culvert bridges in America and is the first railroad structure built in Shelby County. Other attractions include the Shelby Rock Island Depot, Carsten’s Farmstead, and Willow Creek Glass Chapel. Nearby, the Stone Arch Nature Trail offers a large playground, several shelters, and charcoal grills, perfect for a weekend cookout. For more information about Shelby, visit http://www.shelbyia.com/Default.asp.

HARLAN
Riders will want to take a “Pit Stop in Harlan!”

Harlan is a city in Shelby County along the West Nishnabotna River, population 5,106 as of the most recent census.  The town, incorporated on May 2, 1879, was named for one of Iowa’s early US Senators, James Harlan.  A football powerhouse, Harlan has won 12 Class 3-A state championships between 1972 and 2009.  Harlan is also home to the Shelby County Speedway which holds the Tiny Lund Memorial races each September.

Tiny Lund Museum, located on 6th Street in Harlan, opened it’s doors in September of 2001.  Tiny’s first NASCAR race was on October 9, 1955 in Lehi Arkansas.  Lund won the Daytona 500 in February 1963 when he replaced another driver on his team. He went on to win several other races.

Another well-known native son of Harlan is Billy Cundiff, NFL kicker, who played recently with the Washington Redskins.

Headlining the entertainment for Harlan is the Mighty Nish Band – four best friends playing together since 1982. Not a typical cover band, they reinvent songs and make them their own.  They are known for mixing and mashing favorite tunes with a lot of fun and energy.  Also on the schedule is the Traveling Light Band and The Imposters.

Be sure to stop by the Information tent when you first hit town to find out where the camping and entertainment will be held. Shuttle buses will be in place to get you where you need to go.

If you would like to join us for the Pre-Ride, here is tomorrow’s schedule:

Be sure to tune in each day for the daily updates and photos from the route inspection ride on the RAGBRAI web site and FACEBOOK. You can also follow the pre-ride adventure and learn interesting tidbits about the route by following us on TWITTER by following @RAGBRAI_IOWA or  @TJRAGBRAI.