Exhibit shows how Iowa cycling has evolved since 1869

After three days of riding across Iowa, bicyclists may have the week’s routine down. 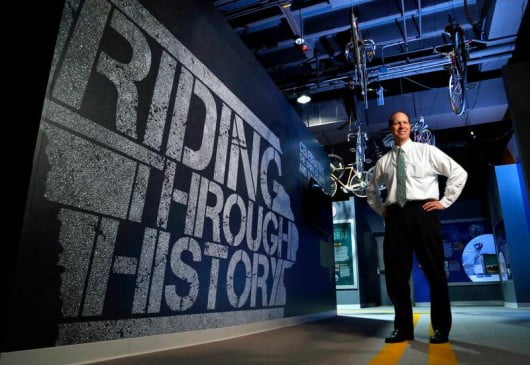 Iowa State Historical Museum curator Leo Landis stands in the entrance of its newest exhibit, “Riding Through History”, a historical look at RAGBRAI, complete with artifacts from the ride’s history, photos, video and even suspended bicycles. (Christopher Gannon/The Register)

But if they want a glimpse into the entire history of Iowa cycling leading up to the moment they dipped their back tires in the Missouri River, they can stop by the State Historical Museum in Des Moines to check out a new exhibit, “Riding Through History.” The exhibit tells the story of the Register’s Annual Great Bicycle Ride Across Iowa and bicycling in the state.

Though the exhibit was designed around last year’s 40th annual RAGBRAI event, it actually starts about 143 years before that, with a blue 1869 Pickering velocipede — thought to be the second bicycle in the state — in a case in the lobby.

With its wrought iron and brass frame and 80-pound heft, it’s not a bike most would choose for traversing the state today.

Next to it, in the same case, is an 1880s high-wheeled bike, and RAGBRAI founder John Karras’ 1977 RAGBRAI bike.

Upstairs in the main rooms of the exhibit, a slide show of Iowans on bicycles welcomes museum guests.

In a nearby case, a scrapbook from a bicyclist in the 19th century sits next to an antique bike lamp and bell.

Twenty-three bikes suspended from the ceiling guide visitors through the exhibit hall as Iowa bicycling history intersects with RAGBRAI history.

“It was fun to show the change in technology over the years,” Landis said.

Nearby stands the 10-speed women’s Schwinn bicycle, which Clarence Pickard of Indianola famously used to finish the first Great Bike Trip, in 1973, at age 83.

The exhibit contains memorabilia from as many different communities, vendors and teams as the organizers could find. Newspaper clippings, scrapbooks and photos line the cases.

In one case is a 16-year-old RAGBRAI rider’s expense report. She spent $15.90. In another, a spatula and frying pan from much-loved vendors.

The exhibit moves to a more modern RAGBRAI and ends with a case about the future of Iowa’s biking legacy.

The exhibit “grew out of how cool a bike exhibit would be,” said Jessica Rundlett, who played a large role in putting the displays together and who has biked multiple RAGBRAIs.

It was Rundlett who found the large metal weather vane, with a bike attached to the top and ride participants’ signatures around the base, that now sits on the museum lobby on loan.

“I saw it in Sioux Center and immediately whipped a U-turn and got contact information,” she said.

Some of the items in the exhibit belong to the museum or were recently donated. Others belonged to The Des Moines Register. But when museum officials put out a call over social media for RAGBRAI items, people began to get in contact with them to donate or lend pieces of well-loved history.

MORE: The museum will host “PedalPalooza” on July 23 from 9 a.m. to 5 p.m. Besides the new exhibit, attractions include bands, food vendors, presentations and kid-friendly activities.